You guys, again, don’t take this as being over cliché, but take this as I’m being sincere with this story, okay? You guys, you don’t know the light at the end of the tunnel. You don’t know what’s going to come tomorrow. What we have is right now. This is all that we know. This is all that matters. You can worry. You can stress. You can be excited about the future, but we don’t know what the future is going to bring. All we have is right now so why does that matter?

You might feel like there’s nothing positive coming, or that these difficulties and these challenges you’re going through right now will never end. But all we have is right now. We must make right now matter. Now I know how hard that can be, trust me, I … well, I want to share with you a little bit of my story through nursing school, and I know a lot of you have probably heard this, but I do want to share it with you. And I want to share with you what has come. And I want you guys to realize that no matter what planning I had done seven years ago, no matter how much forethought I’d put into this, there’s no way I could ever imagine that I would be here now. All the stress, all the overwhelm, all the frustrations I went through, all the excitement, all the planning I went through, I could have never planned for where I am now.

I want to tell you guys that I’m sorry if you’re feeling overwhelmed in nursing school. I wish there was more that I could do. I wish I could sit down individually with you, and have a cup of coffee and talk about your frustrations and try to help you see that it will get better. And I can’t do that. But I can do that through this podcast, and I know this is a one way conversation, but I want you to pretend like we’re just sitting down at a coffee shop, or over lunch, and we’re just talking about some of your concerns.

And then I want to tell you kind of my experience. In 2011, I started nursing school. I moved from Texas up to Illinois to start nursing school, and our son, Taz, was born that April, and he was born with this rare, congenital defect that we had no idea was coming. And so he spent a couple weeks in the ICU at the same time that I was close to the end of my first semester of nursing school. I was still trying to go to school, dealing with what was going on with Taz, and all of that all at the same time.

But I remember maybe in January or February of that year … well I guess it would have been way before that. I remember that summer or something, my wife sat me down, and she’s like, “Hey, I’m pregnant.” And this was not planned, this was not prepared for, none of this was thought about. And so we realized that … I was living with my parents, with my wife and my son, and we just weren’t making it with the lawn business, and I realize I have this other option that’s still there, I had a year to go back and finish my nursing degree. And luckily we found out that my wife was pregnant with my daughter Kai before that time expired, and I would have had to redo all of nursing school. And so I contacted the nursing school, and worked it out to where I could go back up to Illinois and finish my last semester.

On May 14 my daughter, Kai, was born, and on May 15, I got in a car and I drove up to Illinois to finish this last semester. My wife stayed back in Texas for about a month, and then she came up with me. And this time we had no money. I had expired all my student loans. Luckily my parents and my in-laws were willing to help with the money to cover tuition, but we had nothing. We were on food stamps, we were on WIC, we were on Medicaid, we were on all these types of things. We didn’t have furniture in that apartment. My wife actually purchased food with food stamps in Texas, made a bunch of frozen meals, brought them in a cooler up to Illinois, frozen, on ice, so that we had food when they got there. And that’s what we ate.

But I finished that last semester, and after that, I came back to Texas, and got my job, and kept reflecting on my experience with nursing school, and how stressful it was and how it drove someone like me who, I believe, is hard working, motivated, dedicated, individual, to withdraw. And I had done other school before. I got a degree in business, I had minor in Spanish, I had taken sociology courses, I had taken all kinds of college before, but nursing school broke me. And that didn’t seem right to me.

Ep232: How to Talk to Nursing Professors (even when they don’t want to talk to you)

And so on October 31, 2014, I published the first podcast episode of this podcast. This is now episode 267. I’ve published quite a few since then, but in 2014, I published the first episode that was about, I think, oxygen delivery, because that was something I was working on, studying really hard, and I had no idea what the reception would be. There was no NRSNG family back then, it was … Jon and I started this little podcast. And the podcast reception was really well. And people really appreciated the honest, the raw talking, and the honesty about what’s the condition in nursing school, and all these things.

Then I started talking about that experience, and I kept saying, back then, in 2014, that nursing education needs to change. It doesn’t have to be so damn hard. I would say these types of things, and it rubbed some people the wrong way, but then I kept getting emails from students saying, “I thought you were talking about my school,” and, “I thought you were talking about me, and it does need to change,” and, “There’s no reason you should be broken down in tears every night with nursing school.” And so this really started to catch on, and I started to see that this NRSNG family was growing, and that my experience wasn’t unique, and there were things that needed to change.

And so we started teaching. We started tackling this problem head on, and started teaching what was missing in nursing school, in a way that allowed people to learn to retain information. And in 2016, towards the end of the year, in October, November, we launched the first version of the NRSNG Academy. We had no idea if it would be received well, but people quickly attracted to our teaching method, our style of breaking down complex topics, our style of teaching in multi-learning styles, and our style of building this family, and helping you find just the information you need, and not over complicating things.

And then if you fast forward about, almost two years, it’s now May, June, 2018, and we’re preparing to launch NRSNG Academy 2.0, which is this massive change, this massive overhaul. And NRSNG has grown immensely since then, the family has grown immensely since then. I get emails now from people saying, “I’m so excited to be in the NRSNG family.” And that gets me so excited because we’re seeing this movement to change nursing education actually come into fruition. Something that four years ago, I just started saying because I knew it needed to change, but had no idea or method or possibility of doing that. I was one guy in my office, recording straight into my laptop. But we’re seeing that change occurring. This NRSNG family is rallying throughout the world.

And actually our website gets about 1.2 million visitors a month from the U.S., Canada, UK, India, Australian, Philippines, Saudi Arabia, and 200 other countries but those are the places where most people visit from. Social media, we have over three hundred thousand followers. The podcast has been downloaded six and a half million times. YouTube we’ve been viewed four and a half million times. This is just incredible watching this grow and I can promise you guys that when I withdrew from nursing school in 2012 I had no idea that this was coming six years later. I published the first podcast on iTunes and I had no idea this was coming four years later.

When we launched the first NRSNG Academy I had no idea this was coming. When I started working the Neuro ICU I had no idea. You don’t know what’s coming. All we have is now. And I want to encourage you to work your hardest. To dive in. And I wish I could be there with you to break it down with you after clinical session or a class where you feel like things aren’t clicking or you feel stressed or you feel concerned or you feel scared. I wish I could be there with you but I can’t. I can’t be there and I wish I could. But what we can do you guys is we have this community. We have this NRSNG family on social media and through our email and through our podcast and through our YouTube channel and through the NRSNG Academy where we’re seeing changes occurring. We’re seeing nurses grasp information and understand things. And we can do that.

And actually this month you know we held our first ever live event here in Dallas. We got to meet nursing students face to face and personally and see this change that’s occurring. I know things are stressful. I know how hard it can. The only reason I tell my story is so you guys know that I’ve been there and I’m sorry for that. I’m sorry for that. I wish there was a uniform method of just telling people what needs to change and how to change. We are the change. The NSRNG family is the change that’s occurring in nursing education. I thank you guys so much for being part of that family.

Time Management Matters (how to manage your time as a nursing student) | NURSING.com 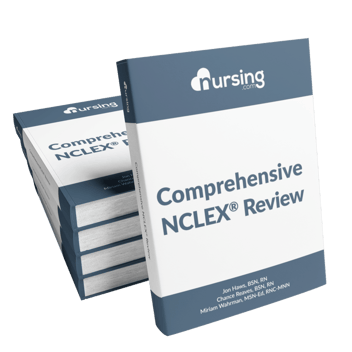